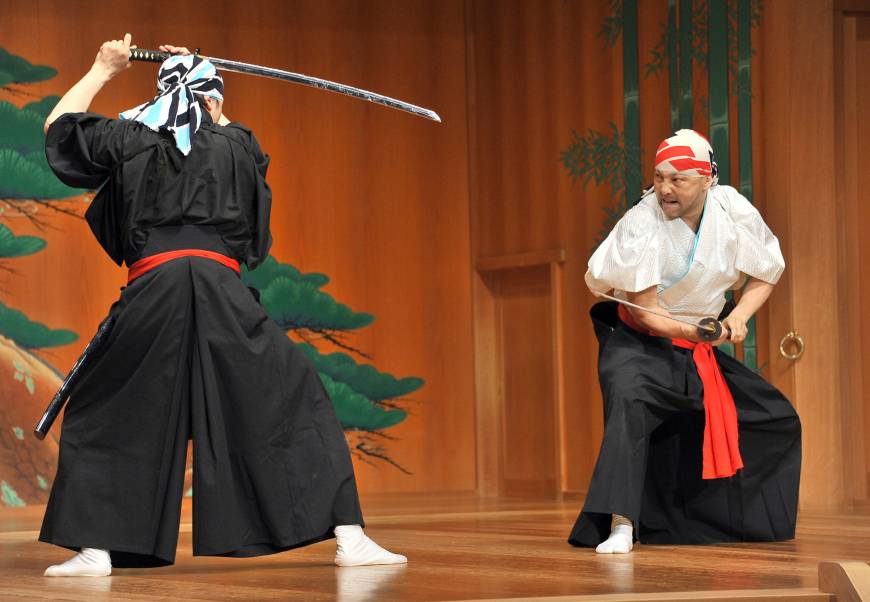 The Kanze Noh Theater reopened in April in Ginza Six, a new upscale shopping complex in central Tokyo that seeks to attract domestic and foreign audiences to a wide range of the country’s traditional performing arts.

With this in mind, the complex’s owners reached out to producer Koji Orita, a senior adviser to the National Theatre of Japan who subsequently devised a project titled “Ginza Hanakagami” for the theater.

“Ginza Hanakagami is an initiative with which to view the history of Japan through Japanese performing arts at a noh theater,” Orita explains. “All Japanese performing arts typically require their own dedicated spaces, and so dedicated theaters were created for noh, kabuki and bunraku. In this project, however, we want to break down such barriers.”

When asked why the Ginza Hanakagami (Ginza Flower-Mirror) project is based around a noh-style theater, Orita says, “Although Japanese arts flourished during the Edo Period, they owed a lot to the preceding medieval period in which noh developed along with other traditional aspects of culture such as kadō (flower arranging), sadō (tea ceremony) and byōbu (folding screens made from several panels).

“Noh is like the brother of Japanese culture and that’s why our project’s name is Hanakagami, because ‘hanakagami’ is one of the Japanese readings of ‘kakyo,’ which is also the title of a renowned treatise on noh by the actor and playwright Zeami Motokiyo (circa 1363 to circa 1443).”

The “Kakyo” treatise contains the phrase “shoshin wasururu bekarazu,” with “shoshin” written with kanji that means “first heart” and the whole sentence roughly translated as, “Never forget your first aspiration.”

However, Orita says that “shoshin” can also mean “the very beginning,” “the first steps in learning something” or “the state before achieving mastery of an art” — all apt descriptions of the Ginza Hanakagami project.

Orita says the theater will kick things off this month with a program called “Natsuno Nigiwai Sumidagawa” (“A Bustling Summer by the Sumida River”).

“We want the Ginza Hanakagami project to showcase the four seasons,” Orita says.

“Japanese have always loved particular things about each season. Sharing the commercial space with myriad fashion outlets and luxury shops, we hope that the changing fashion each season will match the Ginza Hanakagami’s seasonal programs. We are able to create a range of different themes for each season because there are so many characteristics to choose from. To get things started, however, we’ve decided to focus the first program on the concept of summer,” Orita says.

“It is said that rivers develop not only the economy but culture as well,” Orita says. The people of Edo (as Tokyo was known until 1868) utilized the Sumida River that ran through it. For a long time it was simply called the Okawa (Big River).

Orita says the theater has tried to be as inviting as possible.

“Everyone will be able to enjoy Japanese culture,” Orita says. “Full English commentary will be provided and we’ll set aside a time for a demonstration to allow people to practice creating some traditional rhythms and also learn how to use a sensu (hand-held fan).”

Turning to specifics of the first program, Orita says the first program will introduce audiences to summer scenes or customs, including Nichibu (Japanese dance), hauta (short songs), kengi (sword art) and ohayashi, which is a type of music played using a fue (flute), an ōtsuzumi (hip drum), a kotsuzumi (shoulder drum) and a taiko drum.

The program will be presented in five separate performances. One Nichibu portrays a lover’s secret tryst on a houseboat, while another Nichibu encapsulates the carefree feeling of people cooling off by the river in the evening. The program also includes ohayashi music by Roei Tosha, in which a score has been composed to reflect how a single drop of rain eventually becomes part of a torrent of water that floods a river before emptying into the sea and then evaporating to form another droplet of water in the sky. This is followed by a hauta — a form of singing that originated in the 1830s — that attempts to connect audiences to the river.

Last but not least, two samurai will clash swords during a thunderstorm in what has been heralded as a rare performance of kengi in a noh theater. The contemporary kengi performance has been created by Tetsuro Shimaguchi, who was the swordfight choreographer for Quentin Tarantino’s hit 2003 movie “Kill Bill: Vol.1.”

Shimaguchi made his stage debut in a kabuki play starring the famous actor Koshiro Matsumoto IX before appearing in another production alongside the acclaimed Ennosuke Ichikawa III.

During his training, he also learned how to play the Japanese wadaiko drum, as well as Nichibu, karate, kenjutsu and iaido (the art of drawing a sword). He used his knowledge in all these disciplines to create kengi.

“Kengi is a combination of martial arts and performing arts,” Shimaguchi says. “When I started this style, swordfights were only performed in movies or stage productions. I wanted to make swordfights become independent and evolve as an artform.”

More than 15 years ago, Shimaguchi was performing kengi on the street in the U.S. when Quentin Tarantino saw him and invited him to work on choreography for his film.

“Quentin was like a big child,” Shimaguchi recalls. “Although he didn’t know a lot about Japan, he respected Japanese culture. His creative energy and his ability to engage people inspired us to do the best we could for him.

“I was also impressed that actors such as Uma Thurman, Lucy Liu and Samuel L. Jackson respected me because nobody knew me back then. Samuel, in particular, encouraged me, saying: ‘We colored people experience discrimination but we are proud of our history. From now on, if you face a difficult situation, be confident. I love samurai.’

“I will meet Samuel again in June for the first time in 15 years,” Shimaguchi says with a grin. “I didn’t want to organize a reunion with him before my kengi had been sorted out.”

In February 2017, the Collider.com film website chose Shimaguchi’s “Kill Bill” fight scene between The Bride and Gogo Yubari — choreographed by Shimaguchi and Yuen Woo-ping — as the best fight scene of the 21st century.

At present, Shimaguchi is teaching kengi at his school in Japan, as well as schools in Europe and the United States.

Shimaguchi sees kengi as something for everyone. “Anyone can do kengi,” he says. “I have a variety of students, from members of the Saudi royal family to honeymooners and elderly couples.

“I try to introduce Japanese samurai culture when teaching kengi because, even though everyone has heard of such things as samurai and ninja, most people don’t know about the culture surrounding them.

“I always tell my students that samurai were not just warriors — they were leaders of their culture,” Shimaguchi says. “As a result, they always upheld the correct spirit and honed their technique and physical strength. They carried swords but tried save people’s lives without drawing their weapon.”

“I’m happy if kengi becomes a gateway into Japanese culture,” he says. “I want people who come along to the Ginza Hanakagami project to experience something real. You don’t need to try to understand everything, just sit back and enjoy.” Ginza Hanakagami is at Kanze Noh Theater in Ginza Six in Tokyo, with performances at 6:30 p.m. on June 5, 6, 7, 19 and 20, then at 6:30 p.m. on July 3, 4, 5, 24, 25 and 26. For more information, call the Ginza Hanakagami Office (at Mash Corp.) on 03-6450-1238 (weekdays, between 10 a.m. and 5 p.m.) or visit www.g6hana.jp/summerEN.html. Ticket GiveawaySinger AI is performing at the Kanze Noh Theater in Ginza Six from 7 p.m. on June 22. The Japan Times has 10 pairs of tickets to the concert to give away. To apply, complete our online submission form at jtimes.jp/onsunday. For more information about the event, visit bit.ly/AIGinza6.